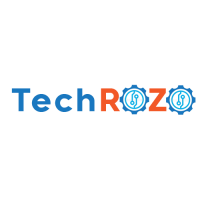 Mohammed Belkharraf
Mohammed Belkharraf, 22 years old, I have a passion for everything related to computers, including programs, and computer problem solutions...
10 Best Screen Recording Software Programs in 2021

It used to be difficult to record a computer, to get things done, you had to either use complicated tools or pay a tech professional, which wasn't always possible.

Aside from tutorials, there are a variety of other reasons to record your computer.

If you do some kind of product demos, need or provide technical assistance, or use video calling, your computer's default screen capture will not be sufficient to capture high-quality footage.

A high-quality screen recorder would serve the function if you want a more accurate way to record the entire screen or only a portion of it.

This article will teach you about:

What Is Screen Recording Software?

The entire (or portions) of your computer or mobile screen may be recorded using screen recording software.

Anything from your taps and cursor movements to typing a URL into your browser can be recorded to help others learn what to do and how to do it.

Audio narration is available, and annotation is often included in a tool's kit.

Others may be able to do all of that, but they may be lacking one or two features. Not every screen recording program, for example, has an HD screen recorder.

As a result, before downloading or installing screen recording software on your computer, you should consider its capabilities.

It's also important to assess your own recording requirements. It's possible that you won't need to record in HD. Perhaps you've just purchased video hosting and don't need the YouTube export function. The best screen recorder for you is one that caters to your unique requirements.

What Is a Good Screen Recorder?

Our selection of screen recording applications includes everything from browser-based software to simple desktop apps. Each selection meets the following basic requirements:

It's also worth noting that many of the software choices have HD recording features. It's important to note, however, that HD files take a long time to upload. HD isn't necessary if you only want to upload standard-quality videos to the web quickly.

The main distinction between the two forms is offline capability.

This is why using an online screen recorder to capture gameplay isn't the best choice. However, if all you want to do is make a tutorial, they should suffice.

The best screen recorder tools on the market are listed below.

Quick note: The collection contains both paid and free apps, so consider your needs before installing them. 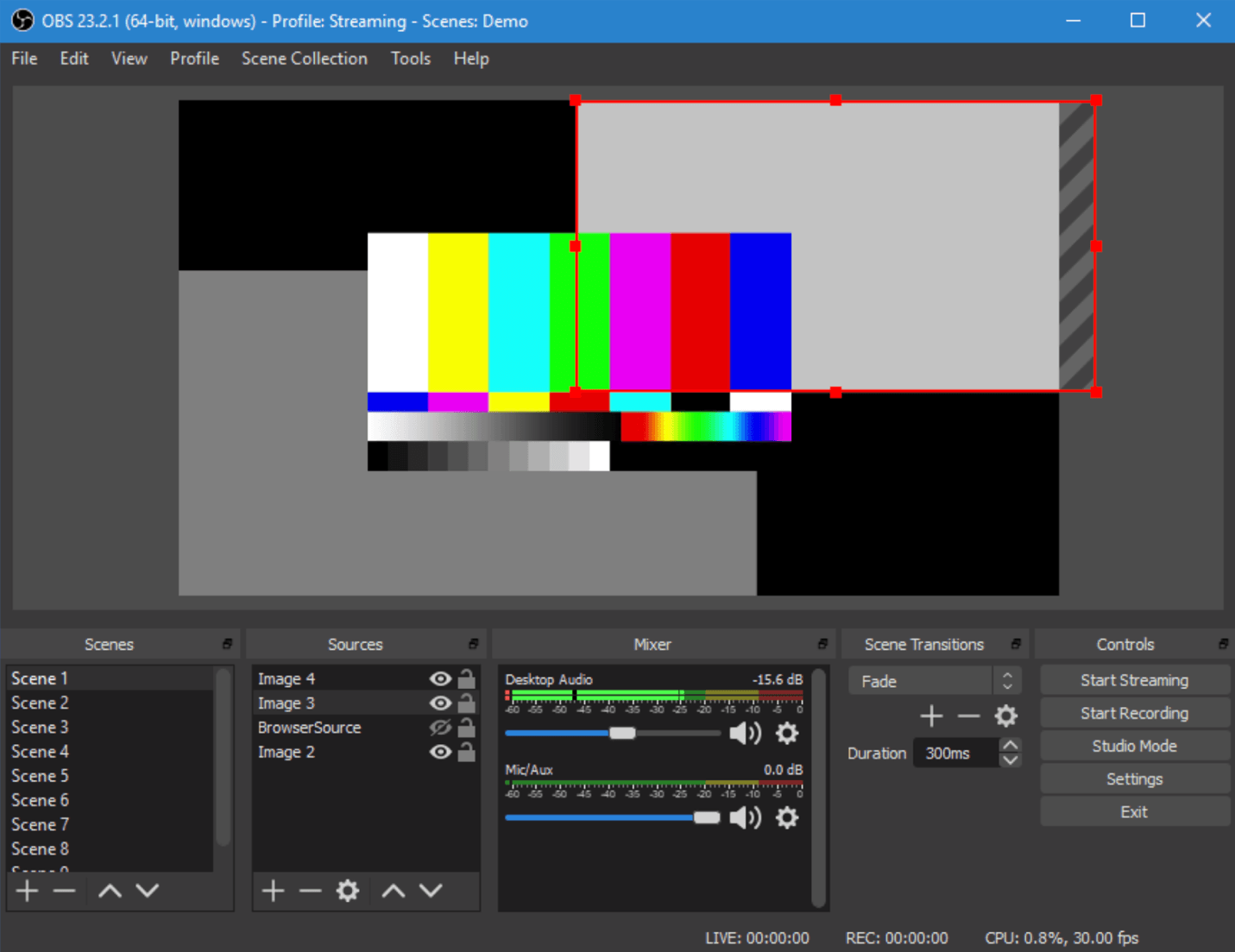 OBS, or Open Broadcaster Software, is a free screen video recorder that allows you to capture and stream high-definition videos with no time limits.

You can select which part of the screen you want to capture with the desktop app, but you can also record the entire screen.

Customizable hotkeys make it easier to monitor the recording, and an audio mixer lets you create videos with a smooth sound.

OBS has live-streaming capabilities that you won't find in the default screen recorders of major operating systems, in addition to the intuitive screencasting functionality.

You can live stream on Twitch and YouTube Gaming, save ventures, and convert your footage to FLV format.

OBS is one of the best free screen recording software choices to explore in 2021 because of all of this.

Best for: Professional live streaming to Mixer, YouTube or Twitch 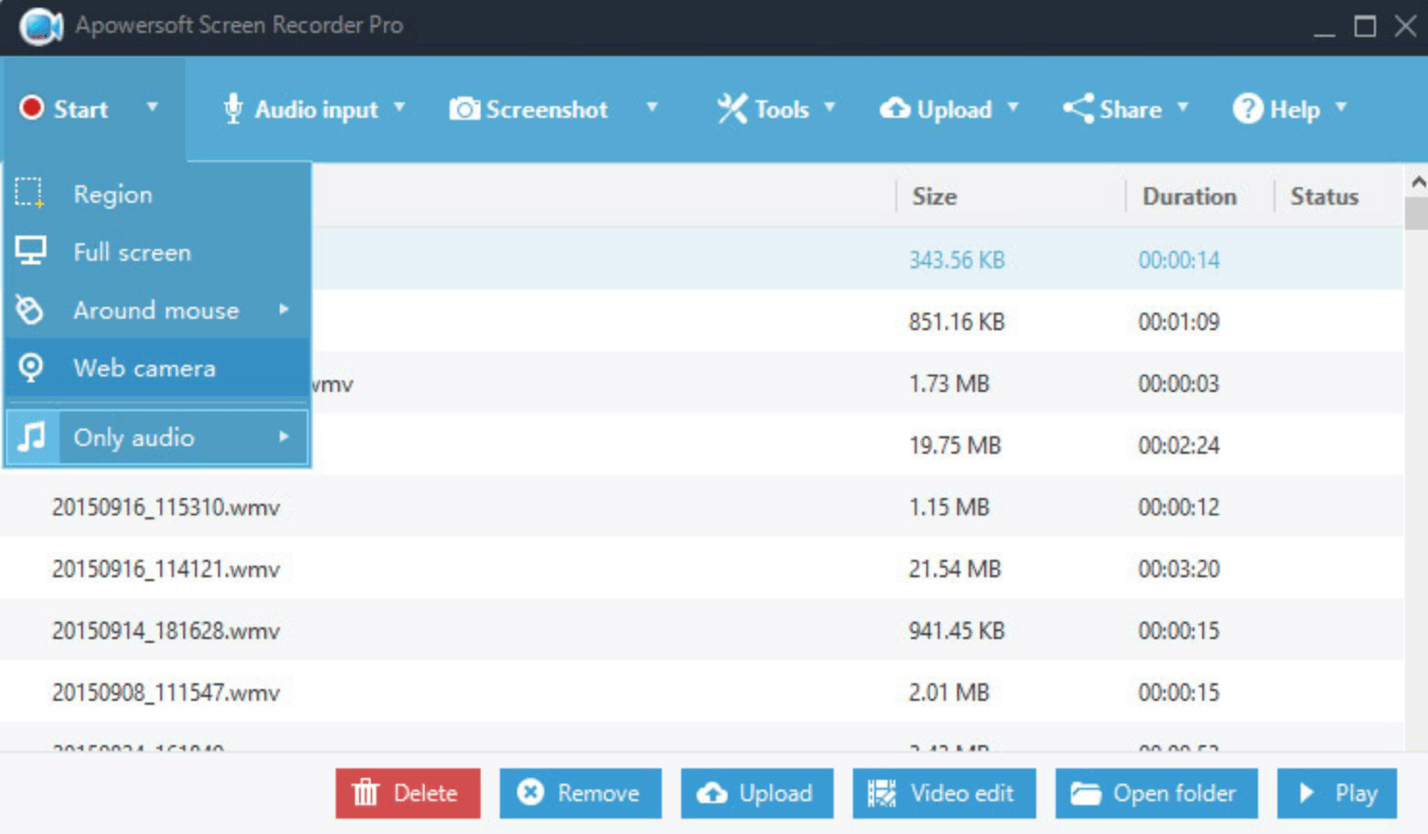 Apowersoft Unlimited is a collection of apps that includes screen recorders for Android, iOS, Mac OS X, and Windows.

It allows you to cast an Android or iPhone screen to your PC and use the desktop recorder to simultaneously record your PC audio, mobile device microphone, and computer's webcam.

The desktop screen recorder supports a variety of recording modes, including full screen, custom area, and more, as well as real-time annotation. You can use callouts, lines, text, and other features without pausing.

Simply connect your device and smartphone to the same WiFi network and start casting with the aid of its intuitive, mobile-specific software.

Users of Mac and Windows can use the desktop screen recorder to capture a variety of on-screen events.

Best for: Demonstrating how to use software that has both a desktop and a mobile version 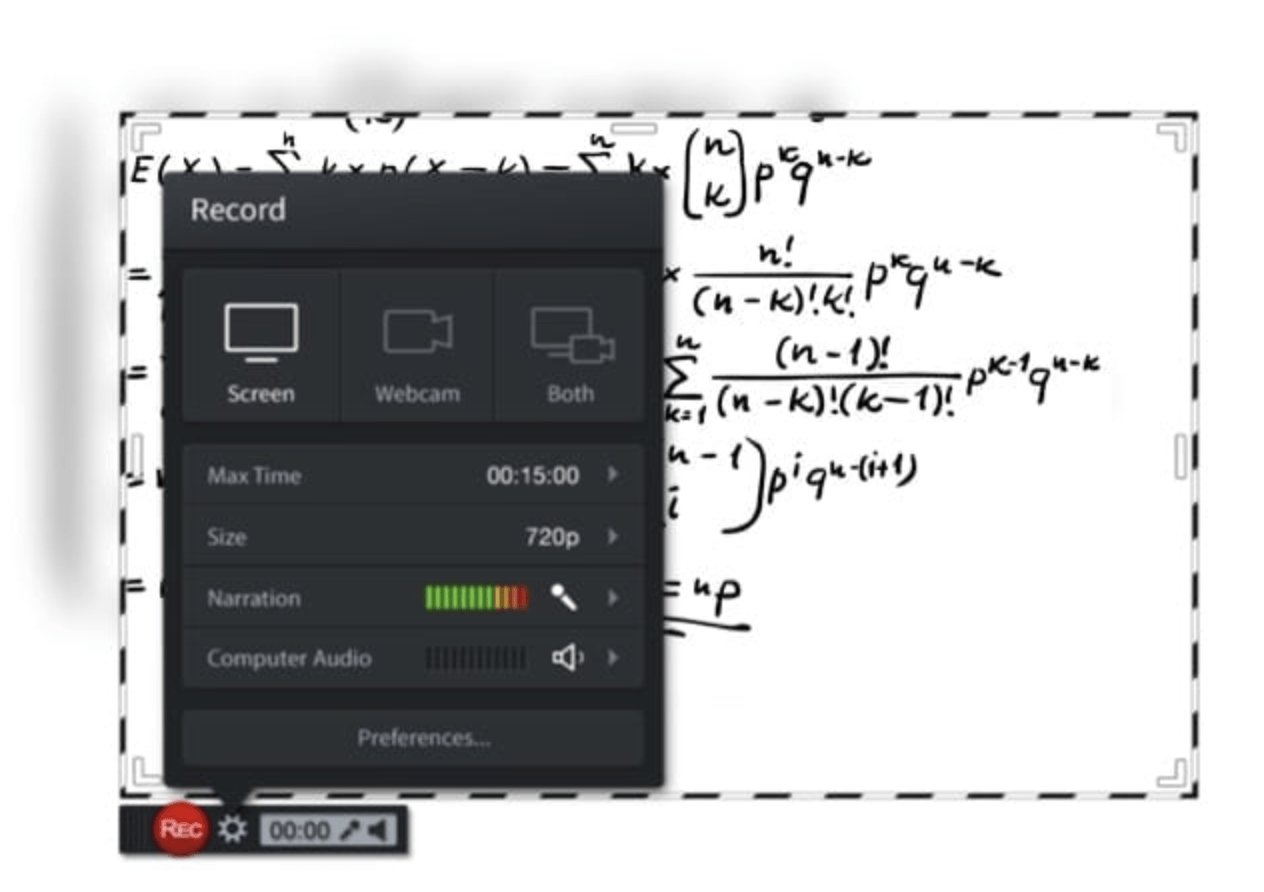 Webcam and screen recordings are supported by Screencast-O-Matic, an online screen recorder and video editor.

It also allows users to zoom in on video files, draw on them, and add overlays.

Additional features of Screencast-O-Matic include the ability to edit machine audio and synchronize recording with video footage.

Keep in mind that the paid edition of the software includes the majority of the editing tools. The free edition, on the other hand, can be used to upload videos to YouTube.

Best for: Making quick tutorials to share with friends, customers or online communities

AceThinker is simple to set up and use a web-based laptop screen recorder.

You can use it to record a particular screen portion or the entire screen, make real-time edits for a more engaging recording, and simultaneously capture audio from your microphone and monitor.

You can convert and save your recordings in a variety of common video formats, including MP4, MOV, and API.

You can also directly upload your recordings to Dropbox, Google Drive, or YouTube using AceThinker.

Both of these features are included in the free version of the app, but you can upgrade to the PRO version for extra functionality.

If you want to record a live stream in the afternoon but don't have access to the internet at work, you can install this screen capture app on your home computer, set a schedule, and let it do the work for you. 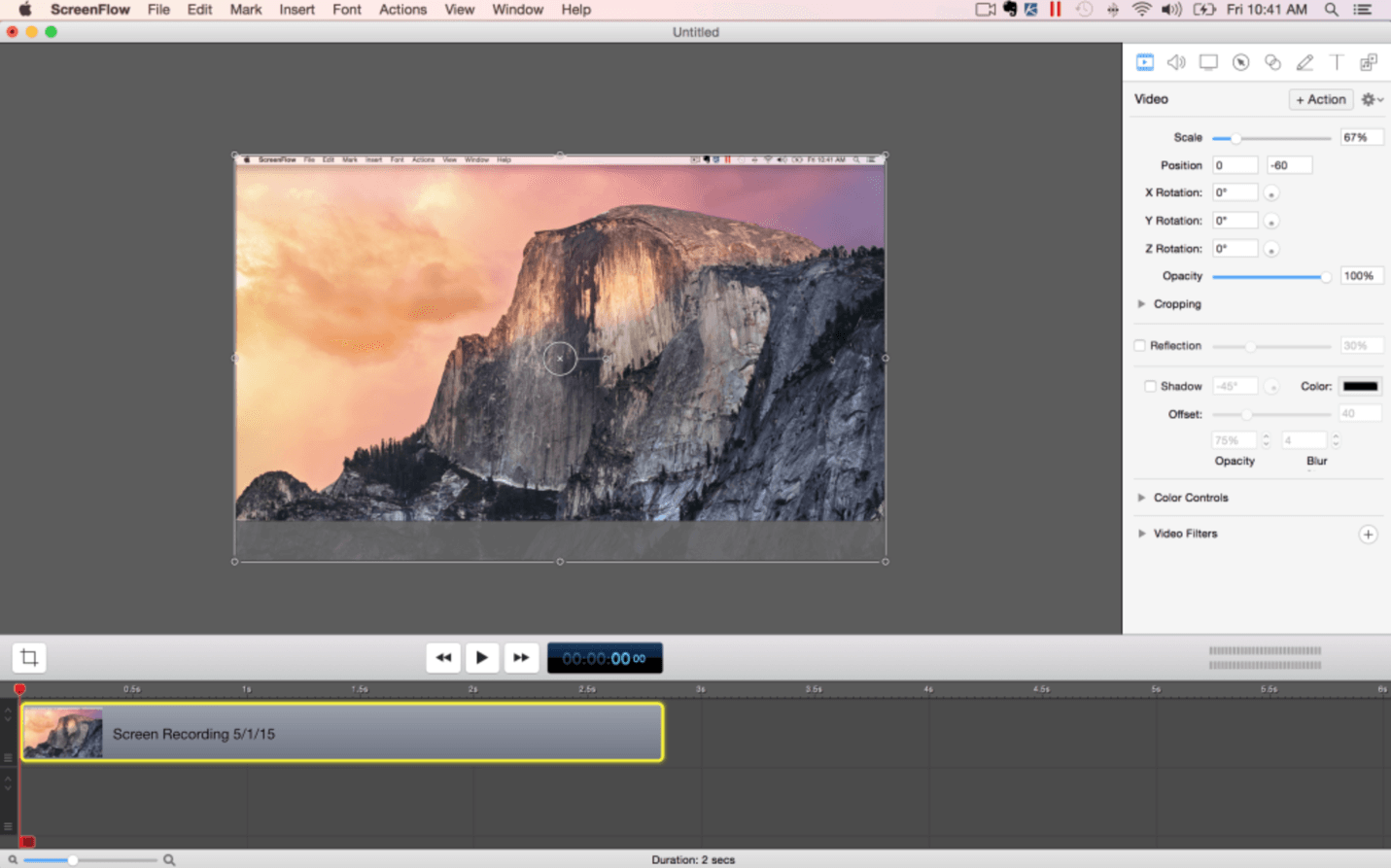 If you're looking for a Mac screen recorder that can also capture audio, ScreenFlow is the app for you.

It has the ability to record your Mac at retina resolution, community video components, and settings, and add background audio to the captured footage, among other things.

For a captured chapter, Styles allows you to save visual/audio settings for specific elements such as drop shadows or color filters.

Templates, on the other hand, enable users to plan ahead of time how they'll organize, insert, and customize groups of annotations like text placeholders and outro segments.

Subscribers to ScreenFlow's Super Pak plan (which is more expensive) also get access to over 500,000 exclusive photos and audio clips to use in all of their videos.

ScreenFlow is unlikely to fail if you want to get the most out of your screen recordings. 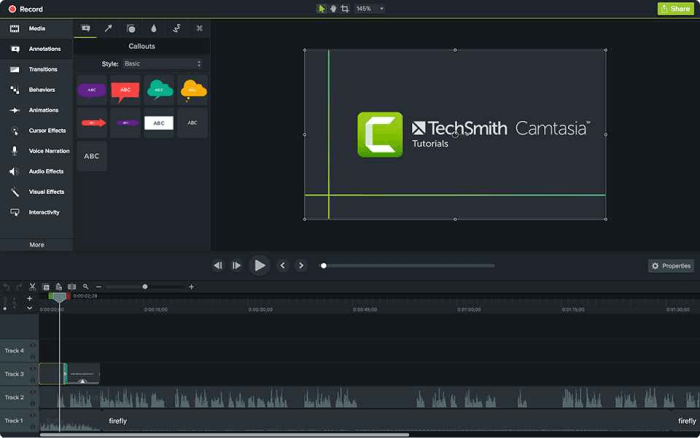 Camtasia is a feature-rich tool for those who value accuracy. It enables you to record video and audio one after the other and then combine the data. In terms of using animations and video effects, as well as incorporating overlays, Camtasia is very versatile. Its ability to create and add quizzes and interactivity to videos sets it apart from other screen capture applications. 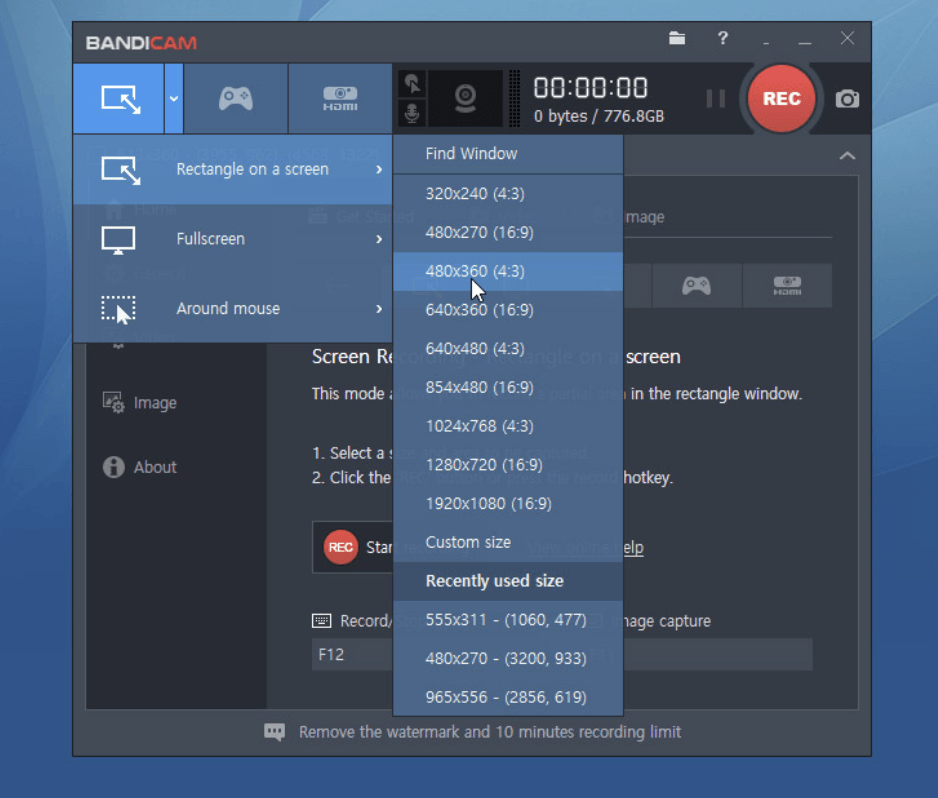 Bandicam is a powerful screen recording program that can capture both the screen and gameplay.

It makes use of a high compression ratio while maintaining video quality. With Bandicam, you can shoot 4K ultra-high-definition videos at 120 frames per second.

The computer recording capability of Bandicam is another noteworthy feature. You can record videos from IPTV, HDTV, APPLE TV, tablet, PlayStation, and Xbox with a separate capture card.

Users can also take screenshots in JPEG, PNG, and BMP formats with Bandicam.

You can basically record everything with Bandicam, including your entire computer screen, Excel spreadsheets, web browser, Powerpoint presentations, and more.

Its free edition has a watermark on the videos, so you'll need to upgrade to a paid account to get the most out of it.

Best for: Balancing the depth of video recordings 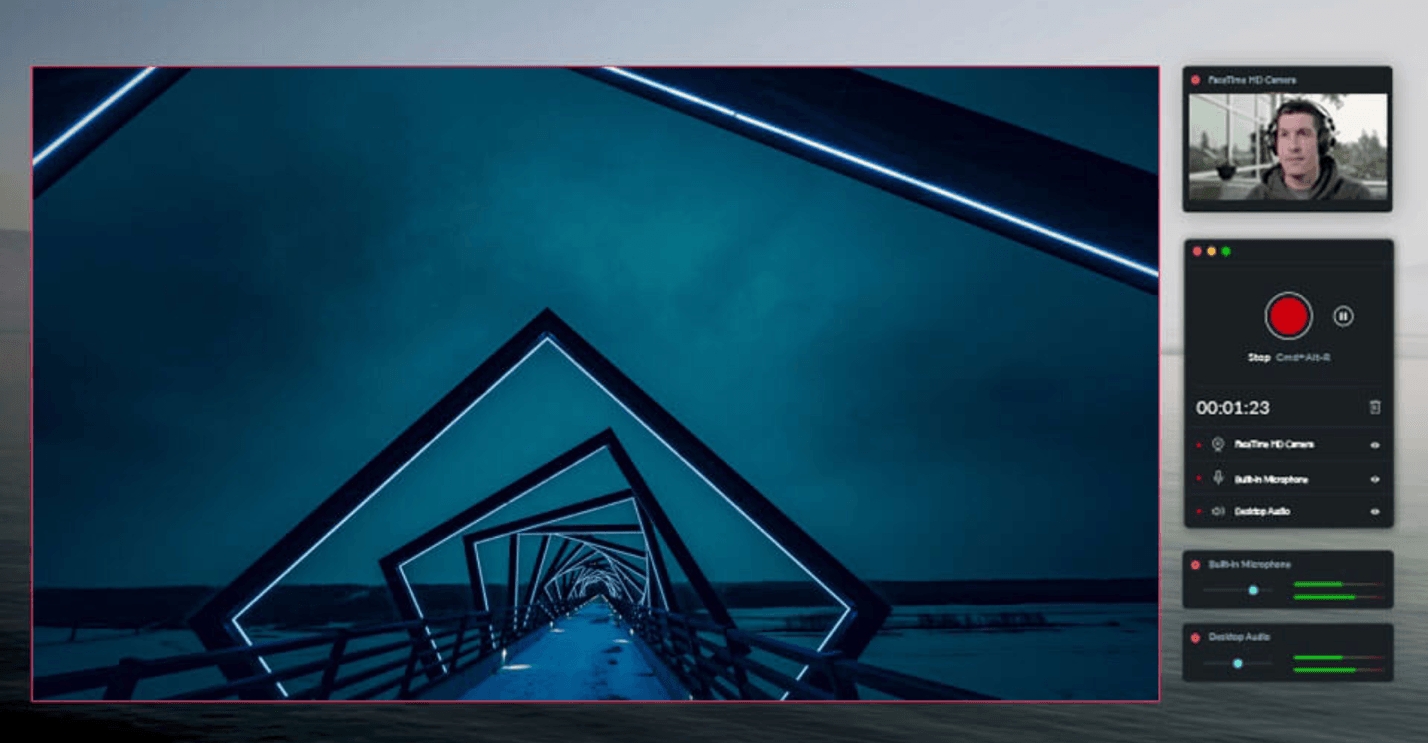 Filmora Scrn allows you to record gameplay, webcam, computer screen, and audio all at the same time, with no time constraints.

It allows you to film at 15 to 120 frames per second. A higher frame rate is perfect for capturing action-packed gameplay.

You may also use the app to add text annotations to enhance the audience's viewing experience. You can also change the scale, color, and shape of your cursor to make it stand out.

You won't need a separate video editing app with Filmora Scrn because the screen recording program includes a variety of editing tools to help you fine-tune your recordings.

It can import files in over 50 different formats, and you can export your recordings in various formats depending on your needs. 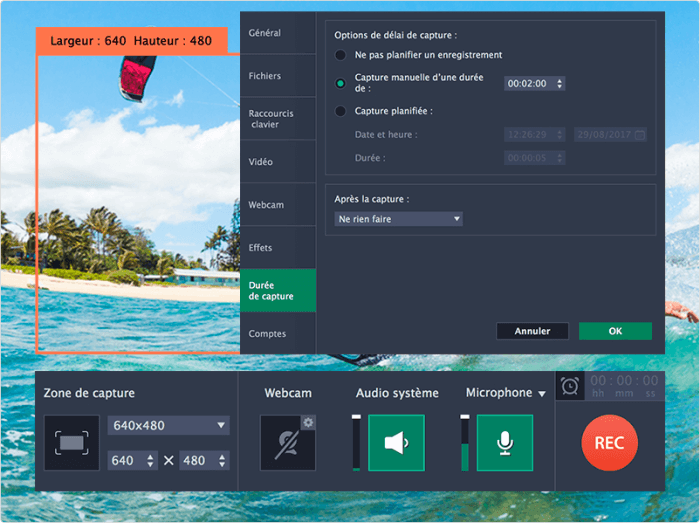 Movavi Screen Recorder is a simple screen capture tool that lets you capture webcam and audio, save recordings as videos and GIFs, and take screenshots. You can save your recordings to Google Drive or YouTube and then share them with your audience via social media. 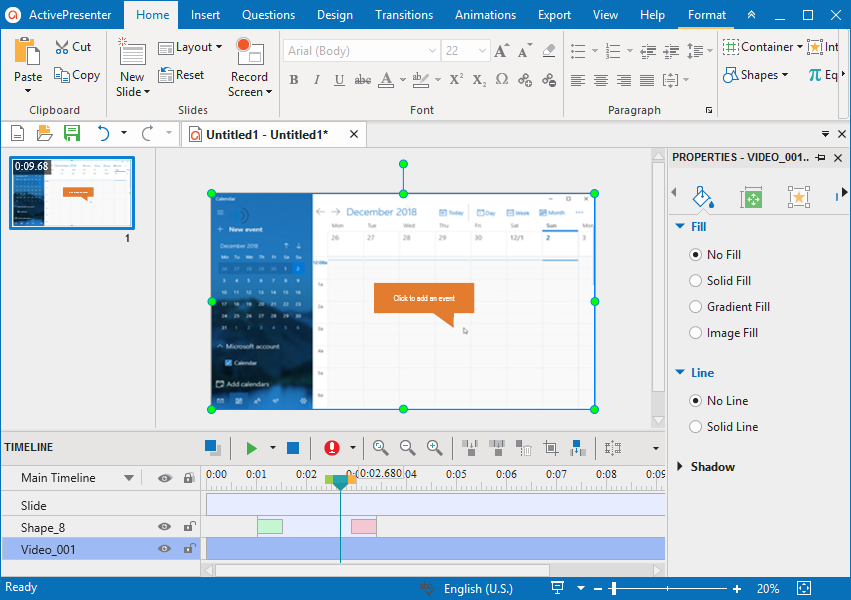 When using free features, the free edition of ActivePresenter does not have a watermark. You can try out all of ActivePresenter's features without any limitations in terms of functionality or time. After the recording has been captured, you can trim, cut, and break it, adjust the speed and sound, add closed captions, annotations, and animations, and more. When you upgrade to the paid versions, more advanced audio and video editing features are available to create impressive videos and software simulations.

Screen recording software can be used for a variety of tasks, and the best ones don't always have to be expensive.

A free screen recorder can be able to help you achieve your goals, depending on your specific needs and the operating system you're using.

You can always upgrade to a paying option if you want more power or access to advanced editing software.

Hopefully, one of these screen recording applications would meet your needs, whether you're making a YouTube tutorial or simply sharing a gaming accomplishment with your mates.

Do you have some great screen-recording apps that we didn't mention? Please let us know in the comments section below.

Sharing is caring!
Shares0
Posted in : Softwares · Last update was 85 days ago

In this article, I’ll introduce 10 of the best paid and free Photoshop alternatives of the year so far.
Softwares

The best video editing software for Windows 10/8/7 to edit your videos or vlogs, make animations, transitions, effects and render wonderful videos.
Add Comment
Comments
There are no comment yet. Be the first.